The photo I have selected today was taken at Trans Iowa v.9. Â TIÂ is a self-navigated, self-supported, 300-plus mile gravel road event. Â It is held in late April of each year and the course is made primarily of Iowa gravel roads that crisscross all over the state. Â  The course is not know the racers until the day of the event when they are given cue cards that tell them where to turn. Â Each of the checkpoints that the racers make it allows them to get the next set of cue cards. Â These same cue cards are what keep photographers like myself on the course.

I was given the opportunity to shoot TransIowa on behalf of Salsa Cycles. Â This was the first time I had ever covered an ultra endurance event and decided that I would do what I do best. Â Shoot it as a photojournalist attempting to cover the eventÂ from start to finish. Â Salsa had two sponsored riders signed upÂ that year. Â Tim Ek and Paul Errington. Â Tim I was somewhat familiar with as he lives in Minnesota but Paul was someone I had not heard of. Â He lives in Newcastle, United Kingdom and I thought wow this guy is flying around the world to come to Iowa to race 300+ miles of gravel, that’s pretty cool. Â So with that knowledge in hand I decided to latch onto Paul the first time I saw him and attempt my best to cover his path from the prerace dinner to post race.

Shooting a 300 mile race, much of which involves rolling hills without much to see in the middle of Iowa, means driving well ahead of riders looking for places of interest. Â After the riders exited the second checkpoint I did just that driving out in front, using the same cue cards they had to find my way. Â After a bit of a drive I came across a field of wind turbines lazily spinning in the late afternoon sun. Â I immediately sized up the spot and got my gear out of the car thinking that the riders would be along shortly. Â Taking a couple of light reading I realized that if I wanted to expose properly for the background the riders were going to be in heavy shadow from the quickly setting sun. Â I took the opportunity to setup a remote flash near the road that would be triggered when I took the picture. Â Everything set I began to wait, and wait, and wait………and then panic sets in. Â Am I on the course? Â Did I miss a turn? Â Has something happened to them? Â Do leave my spot? Â I know the law of photography is that if you leave your spot the riders will come up over the hill just as you get in your car. Â So I continued to wait, and wait and wait. Â Finally riders, a few at a time allowing me to test my setup. Â After what seemed like forever, and as luck should have it, both Salsa sponsored riders came over the hill riding together and into frame, CLICK, and off the go.

So where were they? Â Well unknown to me shortly after that checkpoint there is a gas station. Â These riders have been riding for hours and have already used many of the foodstuffs they packed along so they utilize gas stations to fill up on water, get additional food and basically take a bit of time off the bike. Â I kick myself for not following them out of that checkpoint as surely would have gotten more photos that told the story but if I had left my spot I’m sure I would have missed both.

This image was taken using a Canon 70-200 f2.8 lens and an off camera flash, triggered remotely to provide fill light on the riders. Â  I normallyÂ will carry four lenses when covering an event. Â The 70-200, a 16-35 f2.8, 50mm f1.8 and a 50mm f2.8 macro lens. Â My vision for this shot was to attempt toÂ compress the photo andÂ have the wind turbines dominating the backdrop as the riders rode into the frame. Â Unfortunately I was slightly on a hill that only allowed me to only back up so far and was limited to shooting at 125mm. Â The perfect shot would have been to have room to use my 2x extender essentially making my lens aÂ 140-400 f4 lens that would really have compressed the image but alas you make due with what you are given. 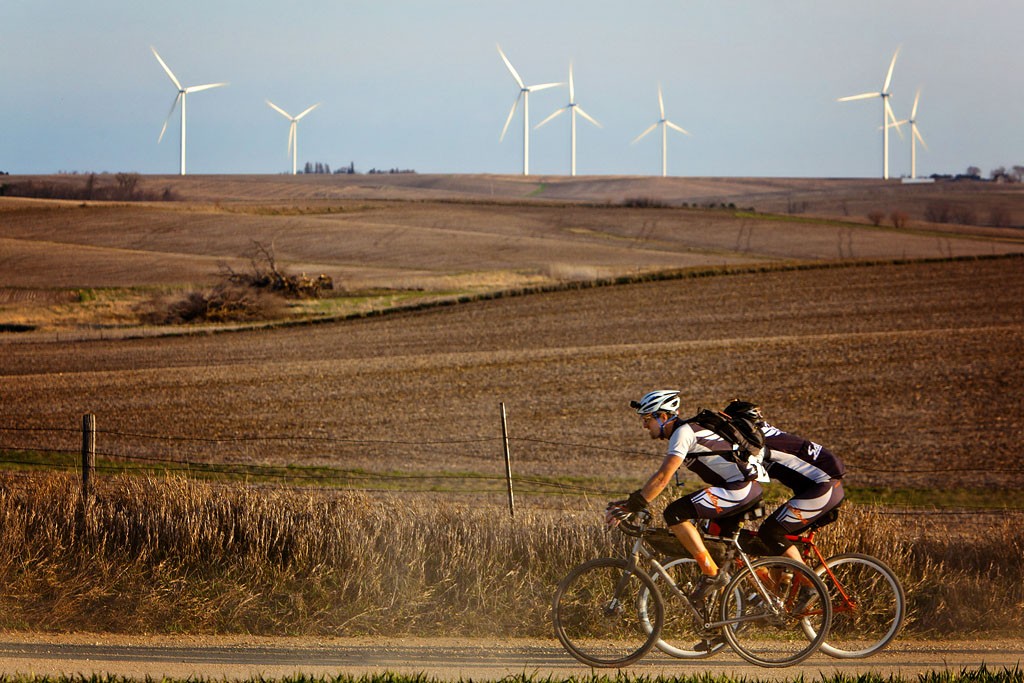